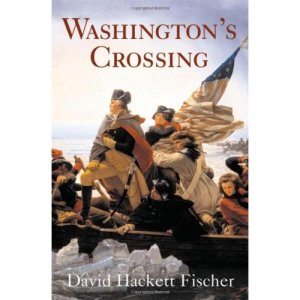 David Hackett Fischer has written a remarkable book on one of the more important events of the American Revolution:  the Battle of Trenton, placing that battle within the larger Revolution with great detail.  The book is part of the Pivotal Moments in American History series, edited by Fischer and James McPherson.  Fischer’s work, like others in the series examines a significant moment in American history and how that event shaped the course of the development of the nation.  Washington’s Crossing explores the importance of Trenton, as it is one of the most important days for the creation of the United States, as without this event, the Revolution would have likely collapsed.(ix)

Fischer provided an enormous amount of background, starting first with the competing forces.  He discussed the American army, including a brief biography of George Washington, noting more democratic elements within it, like the Committee of Privates in one Pennsylvania unit, as well as an overall lack of discipline.(11-2, 27)  In contrast to the American army, Fischer presented the British army as a more disciplined force.(42-45)  Finally, he explored the mercenary forces from Germany, collectively known as Hessians.

In addition to looking at the forces involved, Fischer devoted space to the background of the battle.  Subjects included the Howe brothers, who commanded the British/Hessian forces during the campaign, as well as the failures at New York.  Fischer then analyzed the desperate picture of the American Revolution, discussing Thomas Paine’s pamphlet The American Crisis and how it reflected the low point of the Revolution.  Overall, the inclusion of this background is very helpful to comprehending the importance of the Trenton Campaign to the success of the Revolution.

The detail on the campaign itself is immense, with Fischer describing the conditions of New Jersey under enemy occupation.  Further, his chapters explored key aspects and persons directly surrounding the battle, including Colonel Johann Rall, commander of the Hessian force in Trenton.  Readers will come to have a strong grasp of the battle and the Revolution thanks to Fischer’s inclusion of multiple, detailed subjects on the battle.

In addition to the rich focus, there are several other aspects of this book that make it a landmark work on the Battle of Trenton and the Revolution.  First, is the relative simplicity to the organization.  Fischer structured his chapters both chronologically and by subject.  This organization allows readers to use this book as a great research tool.  Second, is the use of maps and other images that compliment the text, which makes the book accessible to those unfamiliar with the Revolution.

The area where Fischer shines is in his historiography essay.  The essay covers the wide variety of interpretations on both the battle and larger war, focusing upon early views of both the battle and larger war from those who participated in the conflict.  Fischer illustrated how, for each side, Trenton represented different ideas, including republican virtue, criticism of British policy, as exhibited by the Howe brothers, contempt for the Hessians, and religious fervor.(425-432)  He then explored the creation and rise of a romantic school, embodied by Washington Irving, which later combined with an earlier republican school to create the Whig, later called Liberal, school.  George Bancroft characterized this school, which placed the campaign within the larger struggle of democracy and freedom against more oppressive forms of government.(433-437)  This idea of a moral struggle that Fischer alludes to (435) is rather similar to the earlier view held by some participants that viewed Trenton as a righteous victory.(425)

Fischer’s exploration of the historiography included interpretations linked to later events in American history.  He noted how historians after the Civil War studied the Revolution in light of their own participation in the conflict, which renewed their faith in republicanism and a national identity.(438-9)  One of the more interesting aspects he looked at was Marxist Howard Fast’s historical fiction on the war.  Fischer appeared to mention this subject for mere curiosity and hinted at a lack of value of Fast’s work.(445-6)  While Howard Fast may be a way to attract Marxist scholars to Fischer’s book, it seems irrelevant to the overall historiography.

Overall, Fischer’s look at historiography is quite helpful to those unfamiliar with it and wishing to learn more about the war.  He covered the many versions of writing over the years, including the clash in the late twentieth century between academic and popular history, as well as the rise of multiculturalism.  The result is a full treatment of Trenton and the war, which allows the book to be both a standard monograph and reference work.

Another great feature that sets this book apart is Fischer’s inclusion of an annotated bibliography, which lists and discusses the vast amount of primary and secondary sources.  He also provided his own interpretation of the value of various secondary sources.  This section adds to the reference qualities of the work and compliments the historiography essay well, and illustrates that Fischer’s book is based on sound scholarship.

There are so many great qualities to Washington’s Crossing that it is a must read for anyone interested on both the Trenton Campaign and the larger American Revolution.  Fischer provides the necessary background on the players involved and the conflict and created a rather balanced view of the event.   He drew upon both military and social history, discussing the commanders and strategies, as well as providing room for the inclusion of African-Americans and women in the story, which reflected the goals of the series the book belongs to of including traditional interpretations with new trends in scholarship.  His use of appendices, a historiography essay, and bibliography enhance the value of the work to general readers, students, and scholars alike.  While the book appears daunting, it is well worth the effort to examine.  With all the positives to this study, it is very clear why Washington’s Crossing won the Pulitzer Prize and was an American Library Association Notable Book.  David Hackett Fischer made a significant and wonderful contribution to the scholarship of the Revolutionary War.